Ruth and I recently completed a relaxing, sixteen day cruise on Princess Lines’ Caribbean Princess from Fort Lauderdale, Florida to Quebec Canada. Enjoying calm seas and warm (but not overly hot) temperatures consistently throughout this adventure meant greater opportunities to lounge quietly along open air sections typically at the rear the ship. This outdoor strategy proved effective as well in allowing us to find easy refuge from the crowded interior corridors during sailing times. Amidst life’ slowdown on this cruise, I would also note that we made healthy lifestyle choices throughout this cruise to avoid over- indulging in “all you can eat” temptations while maintaining our daily gym workout/yoga regimen.

Being curious to explore, we were also pleased that our northerly itinerary along the Atlantic seaboard enabled us to disembark conveniently at nine, excursion destinations. Capitalizing on a booking incentive of $200.00 extra per person for this cruise, we would allot such bonuses to three, bus excursions of specialized interest. Our remaining land outings ashore, in contrast, would take place on our own, averaging between 3-5 miles walking distance per day. Adding a Hilton Hotel stay onto this vacation at the end of our cruise, we would then spend four, leisurely days touring “0ld Quebec City” in the company of close Canadian friends.

In my first blog installment of this memorable journey, I thus hope you enjoy my photographic recollections of cruise destination #1 – Charleston, South Carolina.

Our cruise dock debarkation point in the heart of “Old Town” Charleston proved ideal for beginning our self guided walking tour in the morning.

The Old City Market dates back to the founding of colonial Charleston in the 18th century. Bustling with tourists, our brief walk along the narrow corridors of this “National Historic Place” revealed a fascinating glimpse at enduring “Deep South”entrepreneurial traditions. 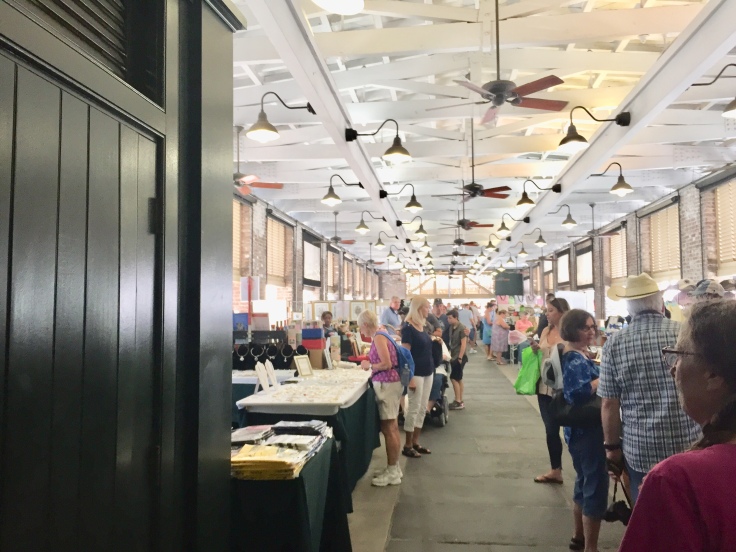 On a quiet side street, the Powder Magazine remains as the oldest public building in Charleston. In the restored museum interior, I enjoyed a “ touch and feel” perspective concerning the authentic weaponry of the Revolutionary War period.

Several early American flags displayed at The Powder Magazine served as a historic reminder that American unity stands as a fundamental principle of our country’s being. 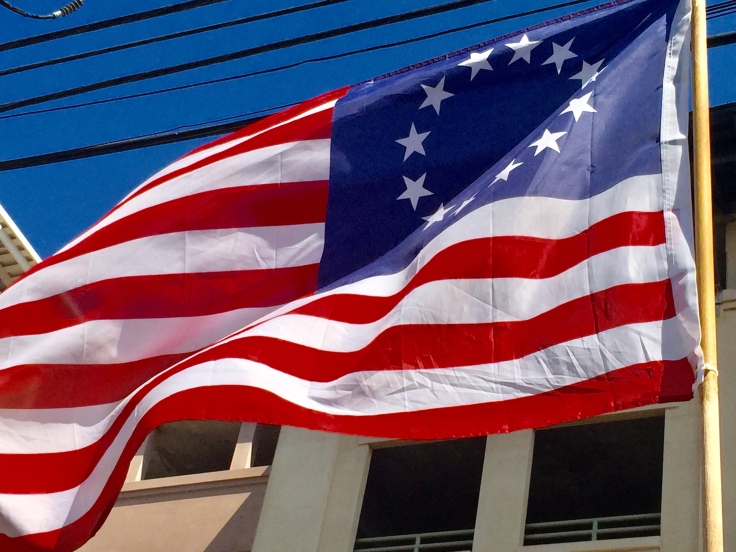 On the site of the privately restored, Old Slave Mart Museum, a bustling center of African slave trade in Charleston took place here in the early/mid 19th century. As photographs were strictly prohibited on our interior tour of the museum, I include the following reference list photo for those readers who wish to learn more about the human tragedy of slavery’s presence in this time period. 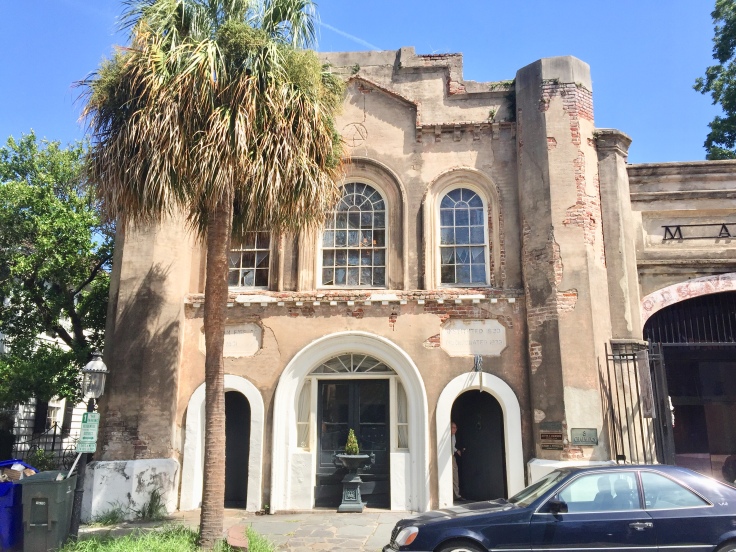 Sauntering slowly south along historic Meeting Street, we stepped into a time warp presence of narrow, horse-drawn, streets and luxurious Georgian style homes during 18th century colonial times. Along the way, several, historic inns/mansions from that era caught our attention as well. 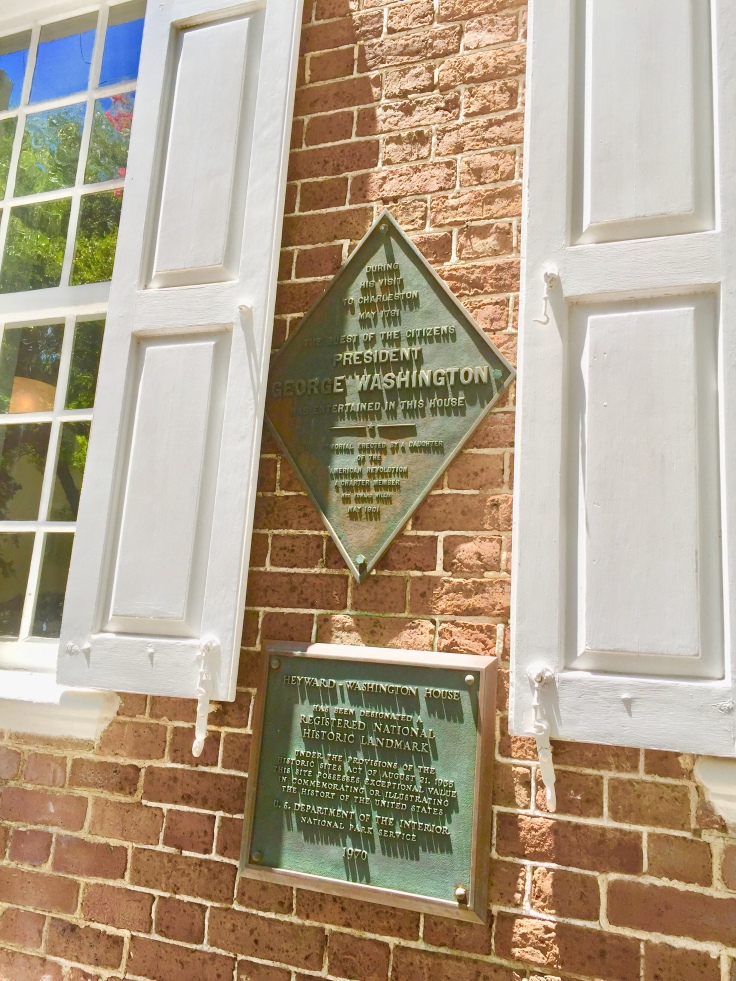 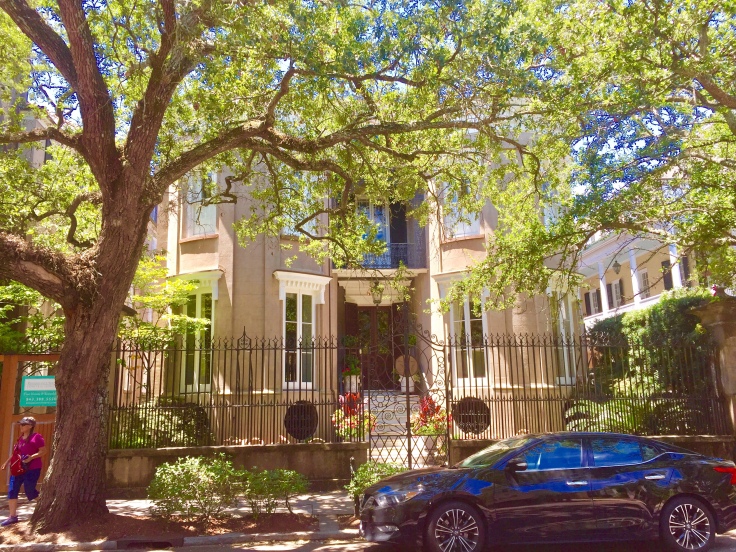 As the summer heat intensified on our tour, we stopped for a leisurely lunch at the historic Blind Tiger Pub. 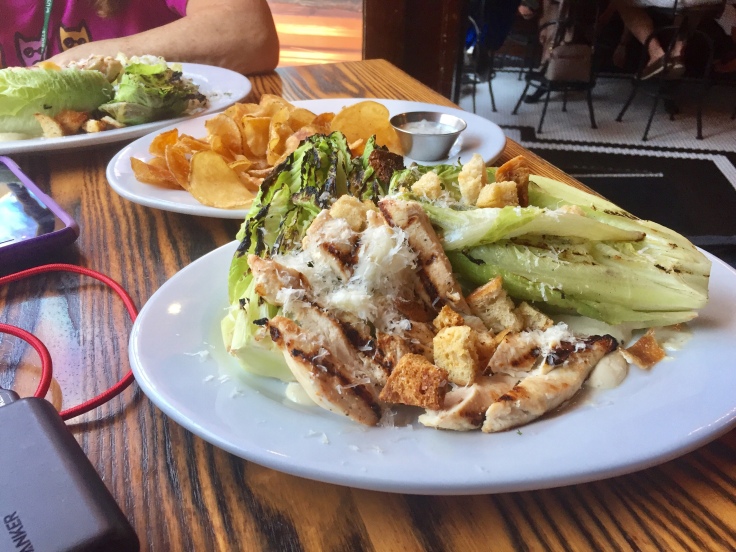 Our walking tour of Charleston ended at the southern tip of the old city: Battery Park. Finding cool shade for a rest under giant Magnolia trees, several landmarks surrounding us stood prominently as testaments to Charleston’s turbulent wartime past. 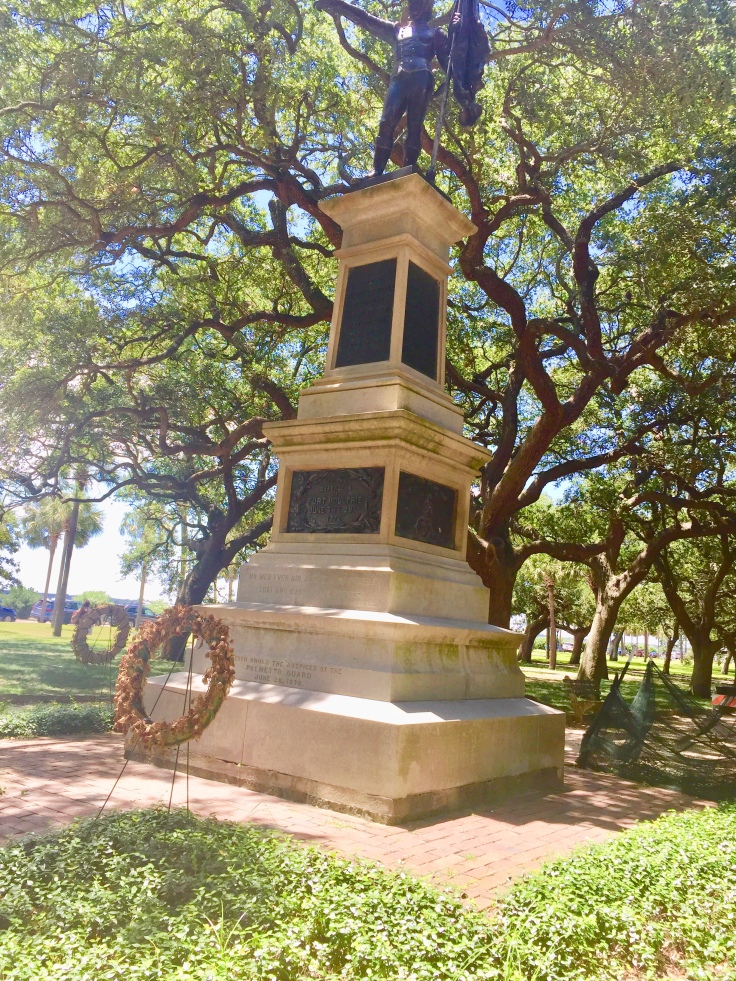 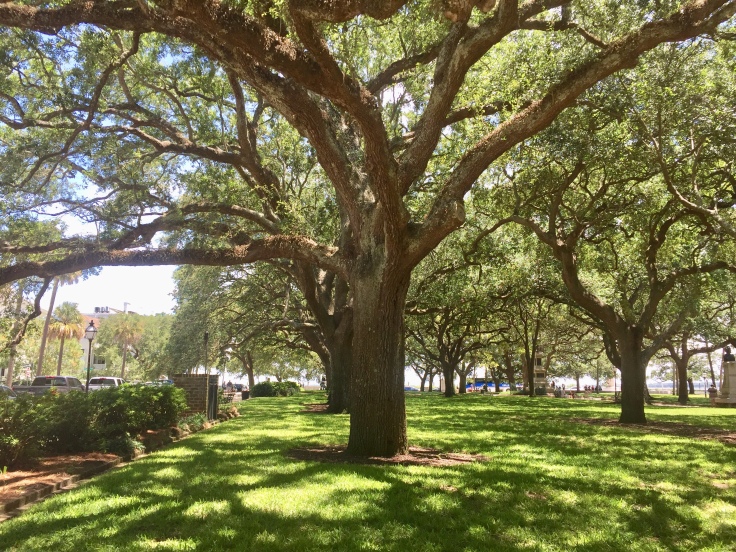 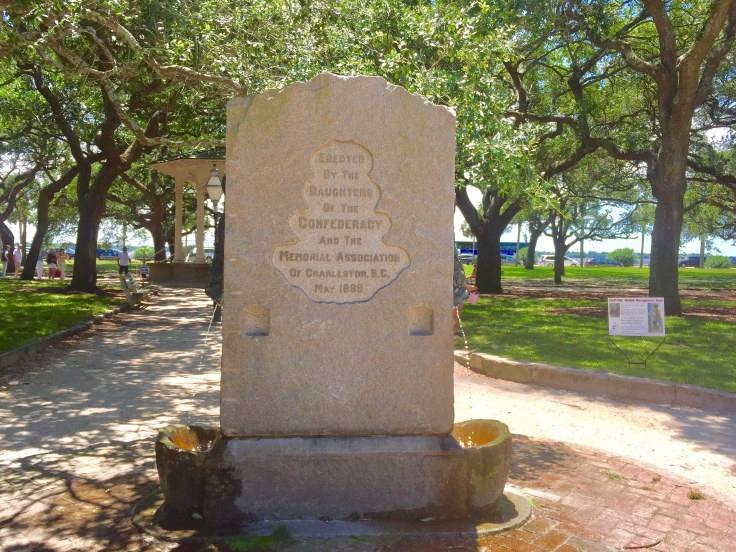 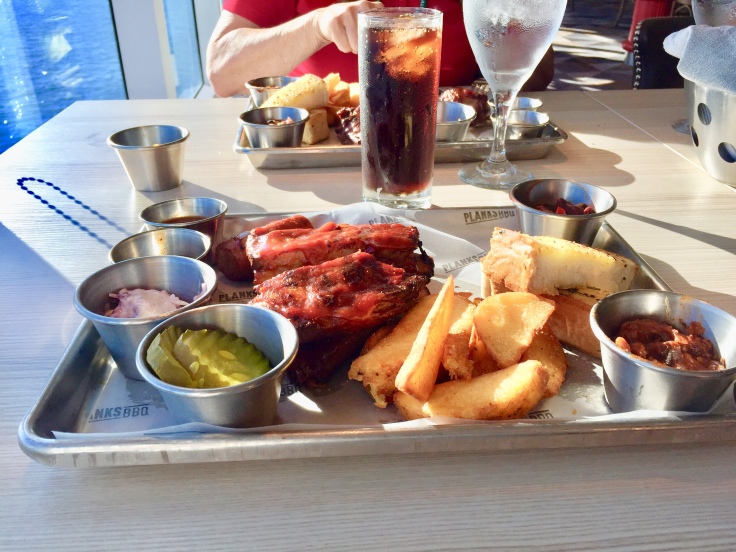 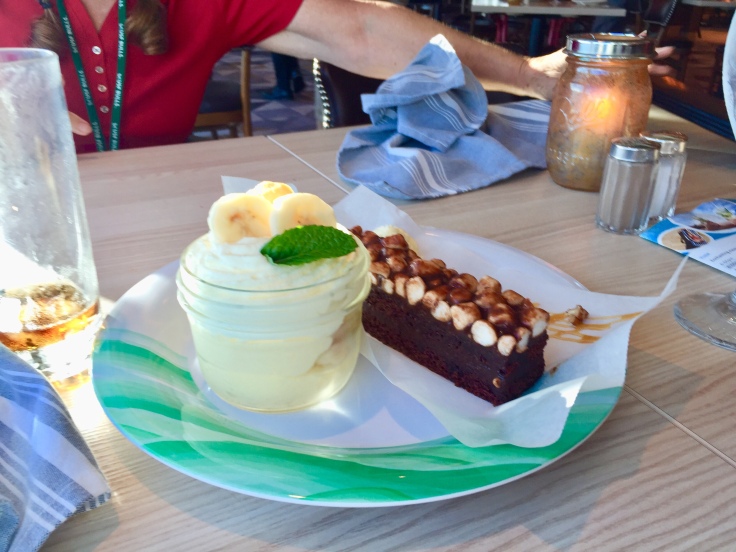 Spotting the historic remnants of Fort Moultrie and Fort Sumter on our route to the open seas proved to be an equally exciting moment in this departure. 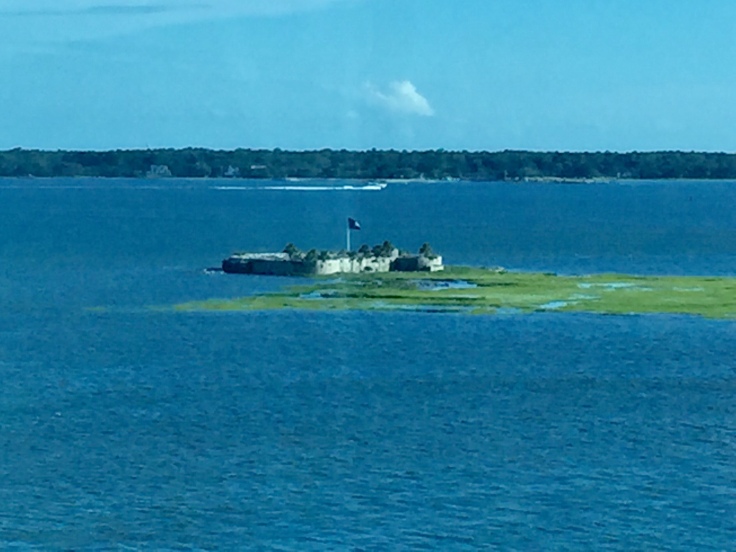 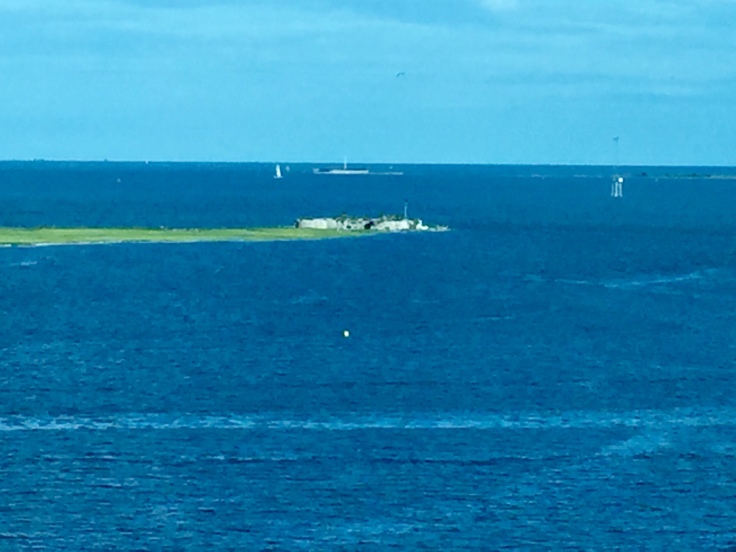